Every company has their own unique story, here is ours. 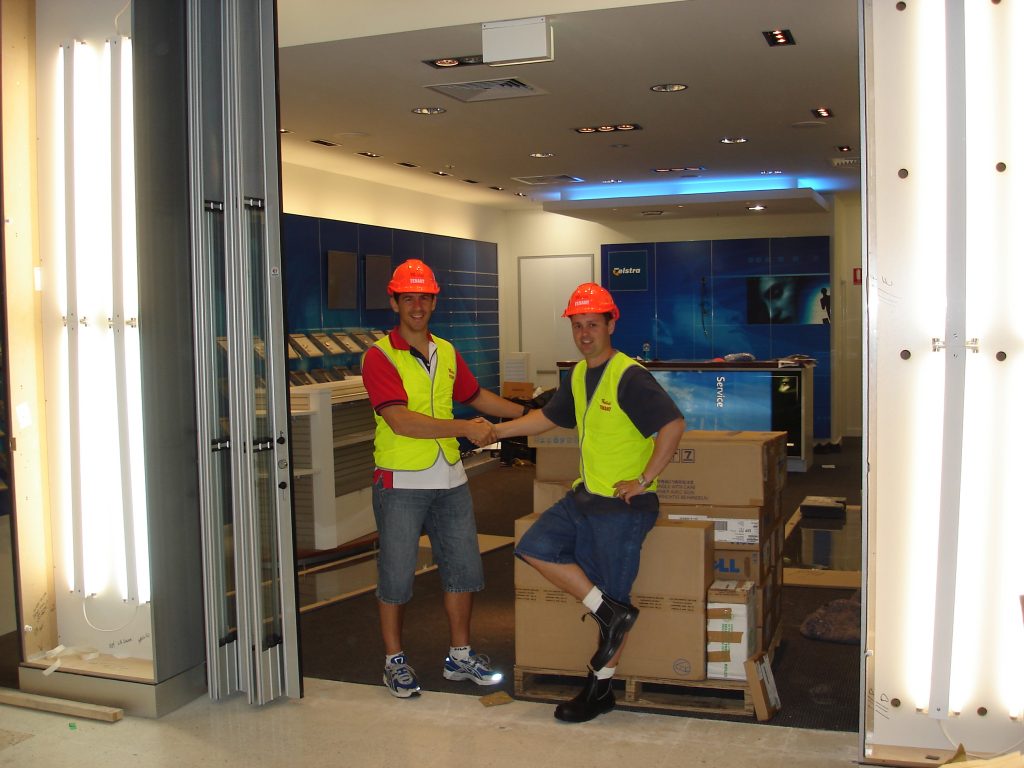 After a combined 15 years of working as Account Executives for Telstra; Tim Tocco and Paul Gunther decided to partner together to open their very own Telstra Licensed Store in Helensvale on the Gold Coast. After months of planning and a very laborious full store build, HTG’s flagship Telstra store was opened by Tim, Paul and their staff of 8, in February 2005.

After only one year of trade, Tim and Paul’s curiosity and innovation was already being noticed by Telstra, making them a store to watch. They proudly finished 2006 with a Telstra Standard of Excellence Award for ‘Number 2 Shop’ in the State of Queensland. It was in this same year that Tim and Paul recognised the value of having dedicated business specialists, to assist small local businesses with their specific telco needs. 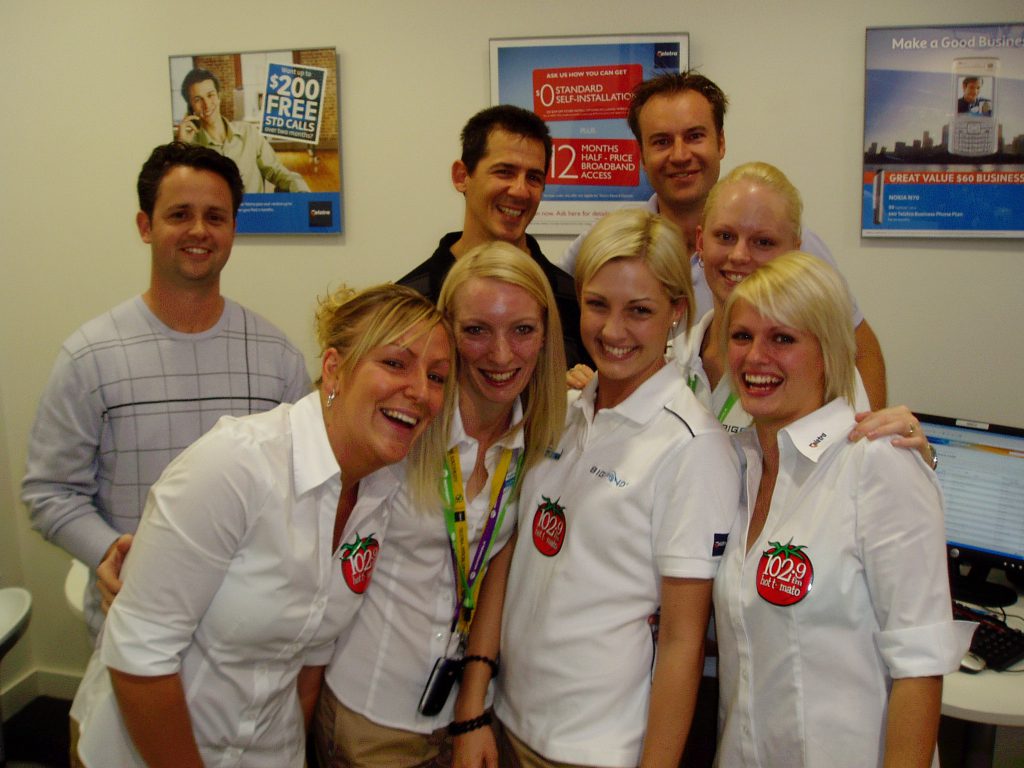 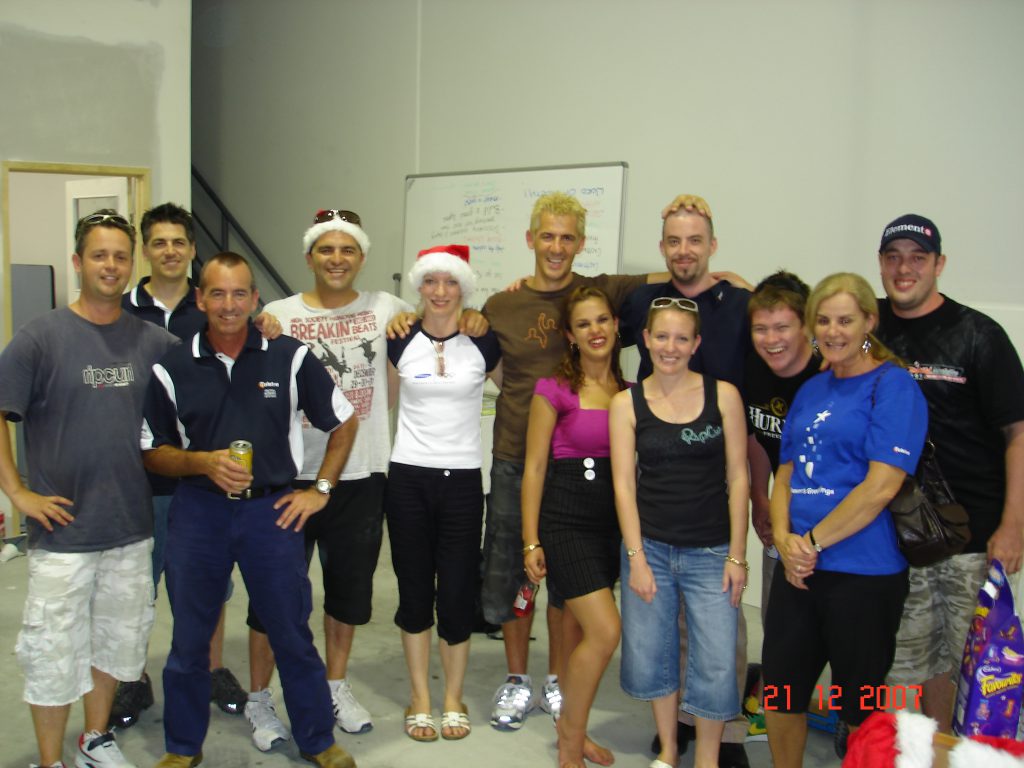 By 2007, HTG had already begun to expand rapidly and their staff of 8 had soon grown to 19. Too large to fit in the store anymore, HTG’s first head office was opened just across the road from the shop. Once again, Telstra Store Helensvale was recognised by Telstra as ‘Number 2 Shop’ in the State of Queensland for Standards of Excellence. A huge year deserved a huge celebration and with that, the annual boat trip was born! A tradition that all long standing employees of HTG look forward to all year.

In their fourth year of operation, HTG showed no signs of slowing down and Tim and Paul became the first Telstra Licensees approved to open a Telstra Business Centre (TBC). Within the first year of the TBC’s trade, they were awarded ‘Best Dealer of the Year’ and ‘Highest Number of Telstra Business Systems Sold’ by LG Nortel. With three sites spread across the Gold Coast now, Tim and Paul began to bring all employees together every three months, for an event that remains a key part of business operation and is now known as ‘The Quarterley’. 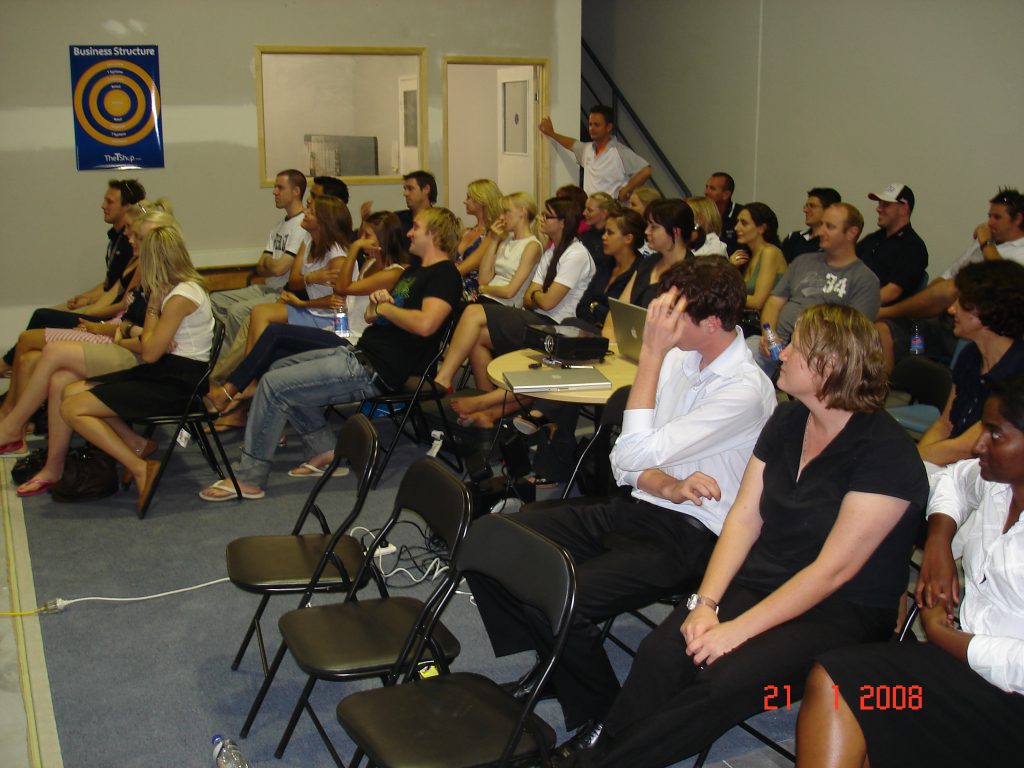 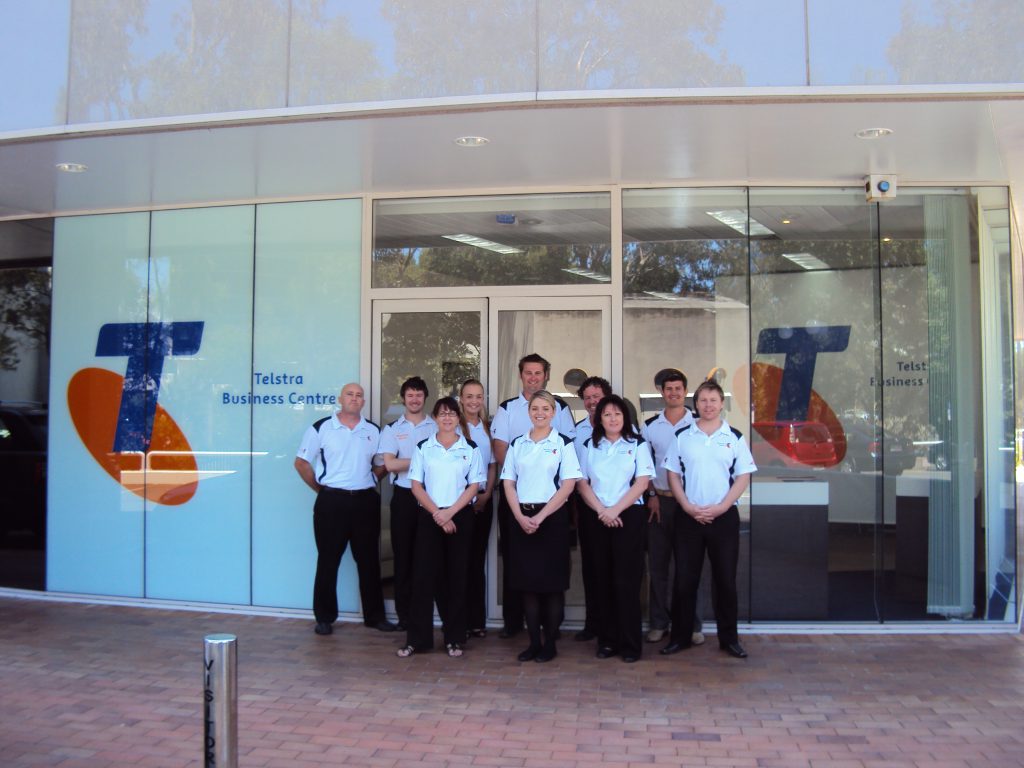 By 2009 a strong culture had formed within the business and it was obvious to any visitor to the company that HTG was a special place to work. Regular visits from a character called Doctor Positivolous kept the teams entertained and in positive spirits and it was apparent that this was a company dedicated to putting their employees first. The year was closed with Telstra Store Helensvale placed as finalists for the award ‘Recognising Outstanding Performance Culture’ and the company winning CyTrack Technologies ‘Most Innovative Partner’.

2010 was a very busy year and the company had expanded to 88 employees. The Telstra store had a complete makeover and was increased in size by more than double, a second Telstra Business Centre was opened in Toowoomba and, a new Head Office had been opened to make space for the increasing headcount. On top of all of this, a small software team had been hired to build an internal CRM, named Paradise, to manage company processes and customer relationships; this went on to be commercialised and sold to other partners within the Telstra channel. 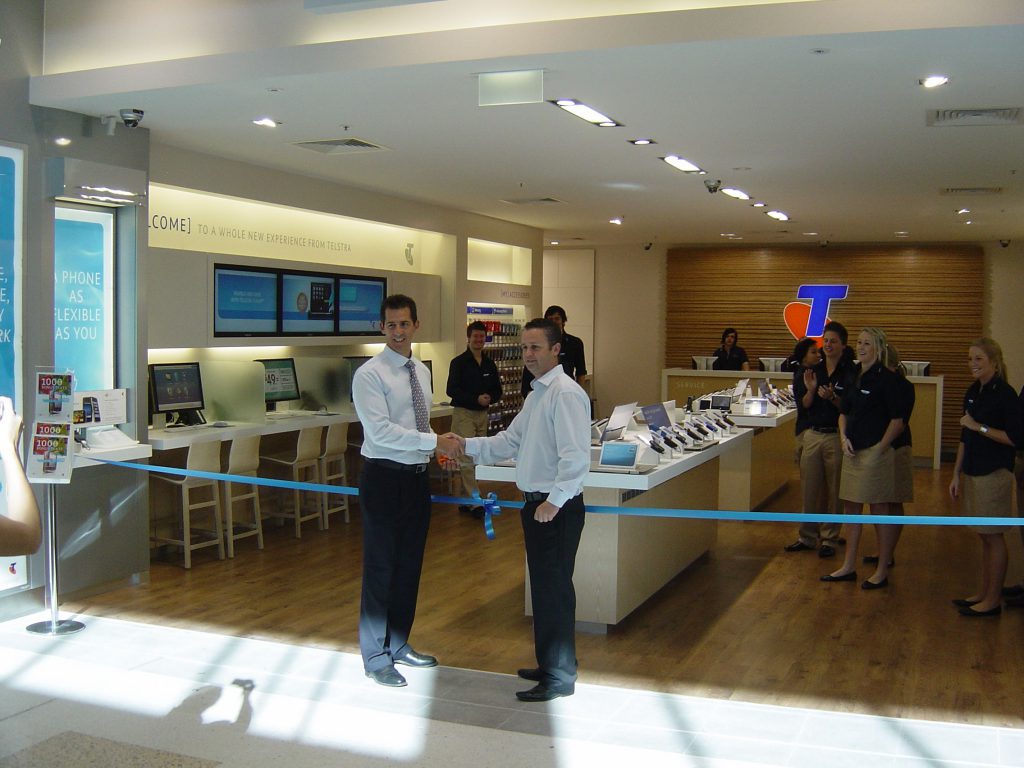 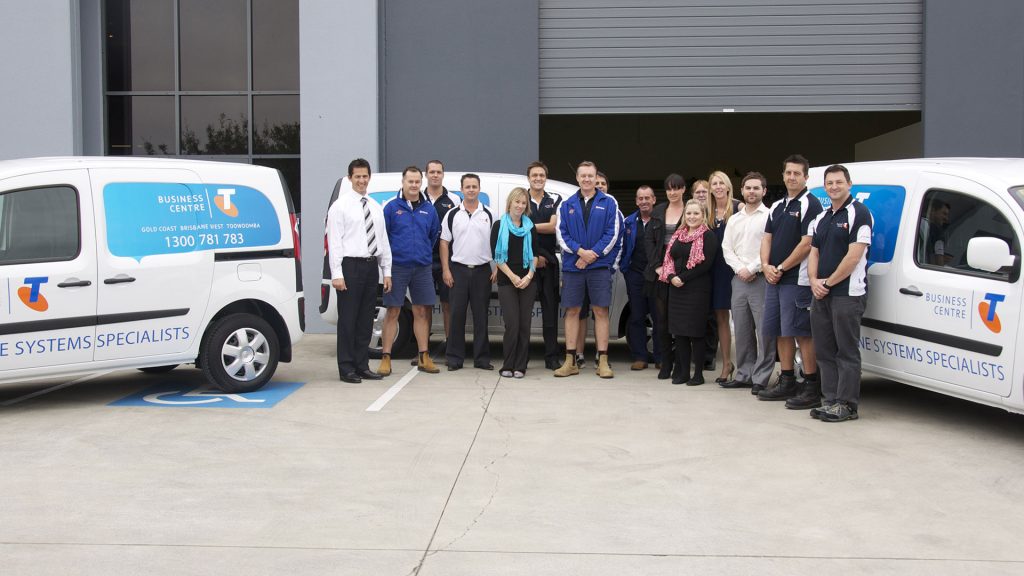 2011 saw the expansion of the Telstra retail space, with a new store opening at Harbour Town on the Gold Coast. Harbour Town is a much smaller store to Helensvale, but soon became known in the channel as ‘The Green Machine’, with their exceptional customer service being recognised and awarded by Telstra regularly. The full company headcount had now grown to 100 and again, it was a good year of awards with HTG taking out the Telstra Business ‘People Award’, and ‘State TBC of the Year Award’.

The growth of HTG continued well into 2012, with the opening of a third Telstra Business Centre in Brisbane, and a third Telstra store in Burleigh Heads. With an ever increasing employee headcount, the need for ongoing training and development became a big company focus, with training programs being built in-house in conjunction with a consultancy agency. The intention of the programs were to recognise and develop top talent from within the business and many two day workshops were run with groups of employees from across the business, to great success. 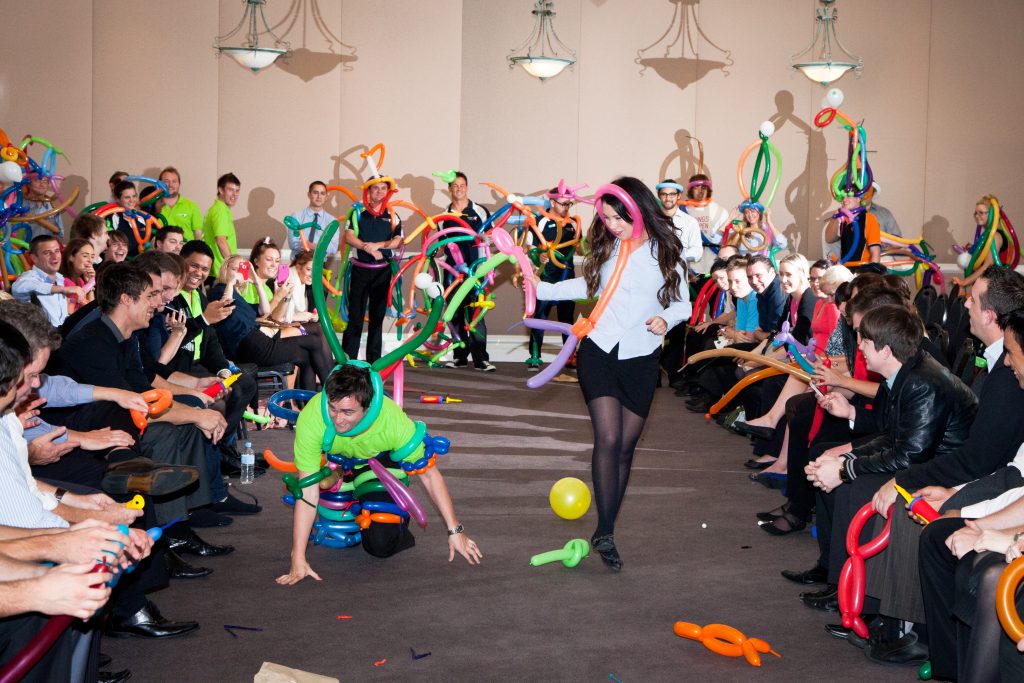 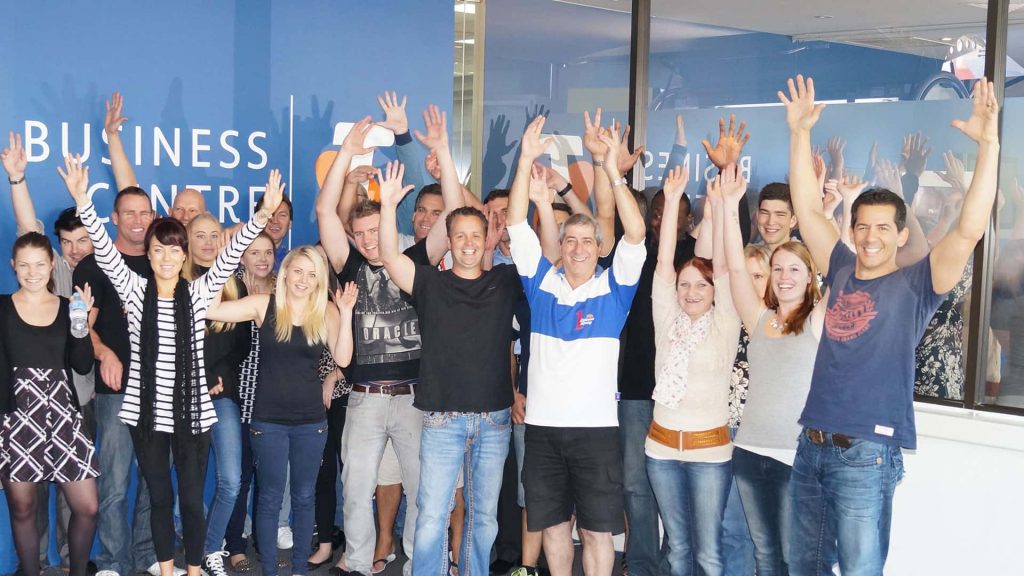 After 5 years in the same location, the Telstra Business Centre Gold Coast moved to a larger premises in 2013. The IT department had expanded from basic in house helpdesk support, to creating and developing software and managing external customers with IT support. As such they had outgrown their office at Head Office, and moved in with the TBC in Bundall. Development and training continued to be of great importance and new programs were created with the intention of both personal and professional development for all employees, and over the course of many months, all 140 employees had completed the training course.

With the IT department growing rapidly and technology moving quicker than it ever had before, an opportunity arose to build a new piece of software that was created from an internal need to capture customer signatures quickly and easily, and fix an issue with the storage of an expansive amount of forms and contracts that were used by the company daily. The software was named Formaliti and went on to be used by businesses internationally. The year ended with Telstra Store Helensvale winning the coveted Telstra Award: ‘Retail Store of the Year for Customer Advocacy’. 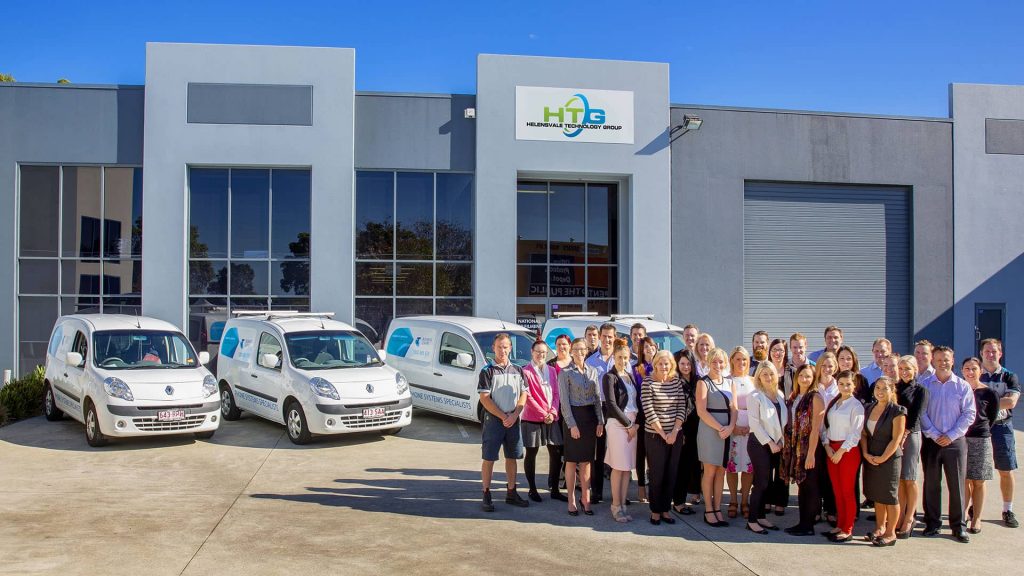 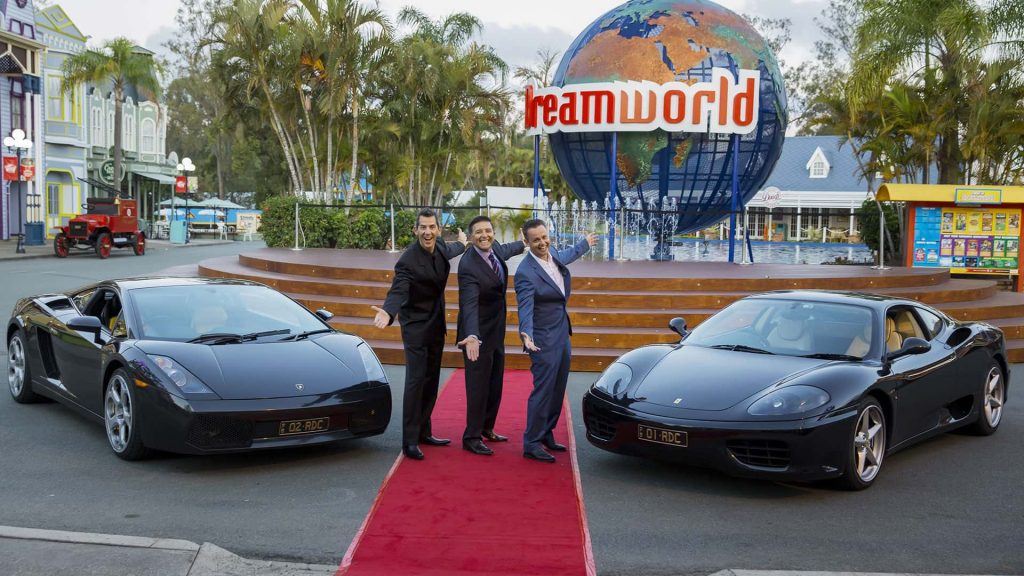 2015 marked the company’s 10 year anniversary, and in true HTG style this was celebrated in a big way. The annual awards night was held at Dreamworld, which had been privately hired for the evening, with rides open, entertainment and plenty of food. It was here that Vince Sorrenti announced that this year, in celebration of a great 10 years of operation, the 20 award winners would be taken on a 4 day, all expenses paid trip to Hamilton Island. This later became known as the ‘Diamond Awards’ and is an annual prize that is still offered every year.

In 2016 the employee headcount had increased to 160 and once again, a larger Head Office was needed. The office moved a huge three buildings up the road and was built with the intention of being unlike any building the company had occupied before. The build was complete with a recreation room, with Table Tennis, Foosball and board games, a cafe serving food and beverages to all employees every day and a large, modern communal area that staff enjoy together during breaks. If the build of the new Head Office wasn’t enough, 2016 also saw the move of the Telstra Business Centre Gold Coast to the Brickworks on Ferry Road 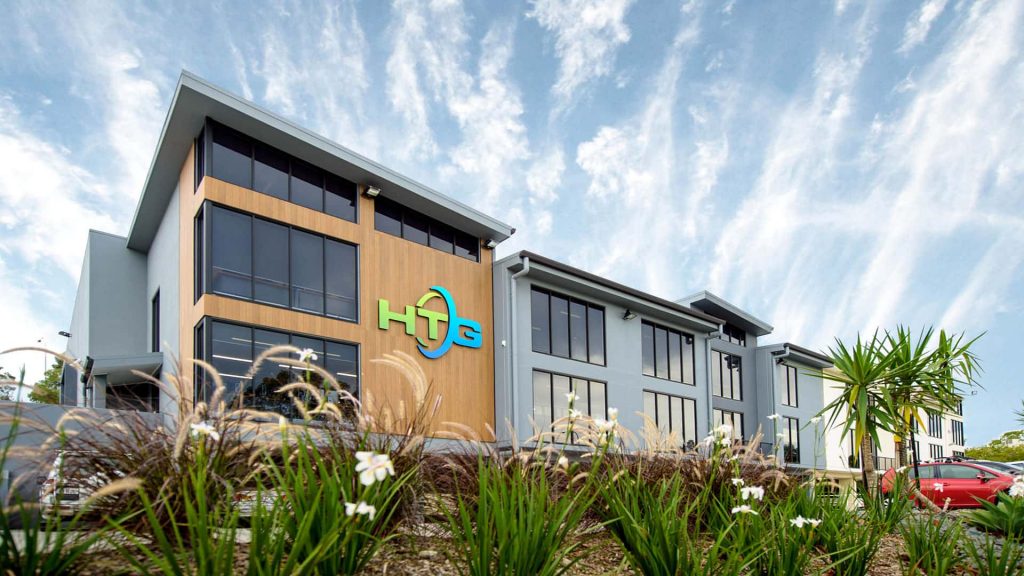 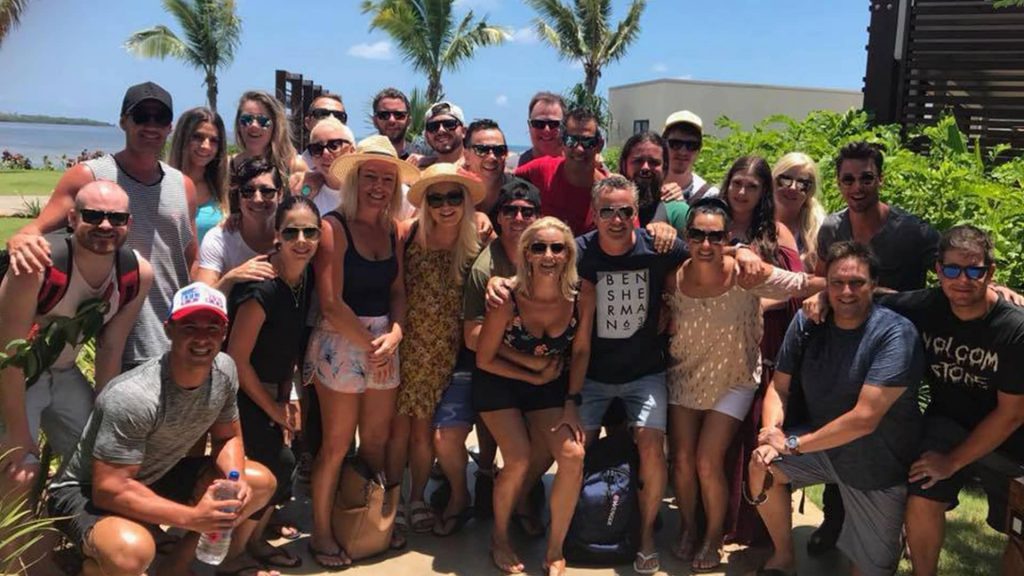 In 2017 HTG won one of their greatest and proudest achievements to date. On their first ever submission, HTG were awarded by Great Place To Work Australia (GPTW), as the 69th best company to work for. The submission to the program is contributed to by all employees of HTG via an employee satisfaction survey that is sent directly from GPTW, making the achievement even more special. The Diamond Award winners were taken away once again, this time internationally to Vanuatu.

In 2018 Telstra made an announcement that they would be transitioning their Telstra Business Centres to Telstra Business Technology Centres, a channel that is focused on Information Technology, rather than core Telstra products and services. Licensees were to apply and bid for their chance to own and operate one of the 28 centres, and after months of work from leaders in every area of the business, HTG won not just one, but two TBTC’s. HTG was recognised once again by Great Place To Work Australia, this year ranking in 37th position. 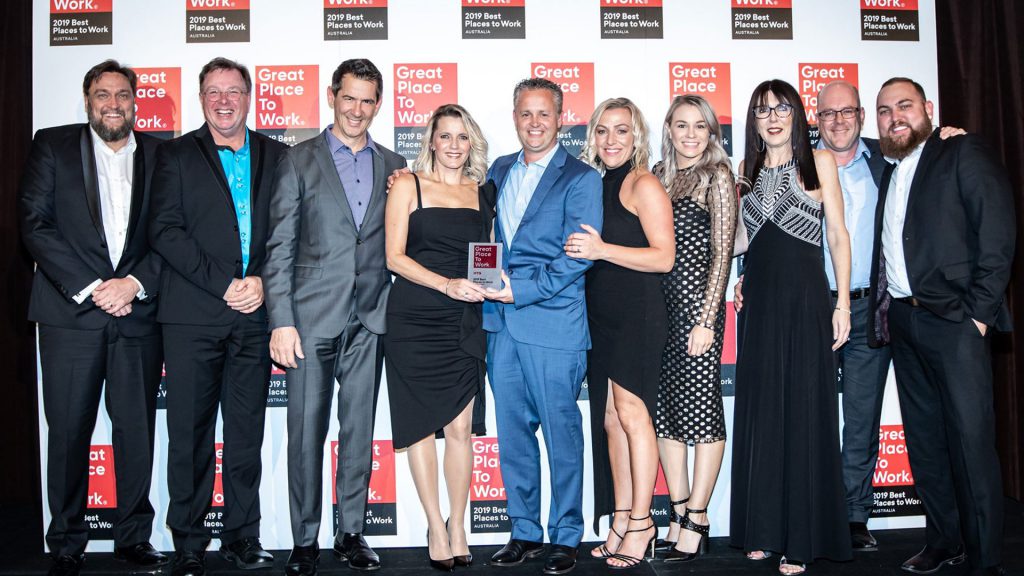 Along with the Directors, all Senior Leaders dedicated a lot of their time in 2019, to analysing the feedback gathered from employee satisfaction surveys, and using this to create plans, improve processes and implement new initiatives. The goal of this was to continue to improve the happiness and job satisfaction of their teams. In October, Great Place To Work Australia invited HTG to their awards night in Sydney where they would be awarded the 14th best place to work in Australia; this was a hugely proud moment for the Directors and Senior Leaders, that was shared and celebrated company wide.

2020 was a tough year for businesses of all sizes with the Covid-19 Pandemic providing unpredictable challenges. HTG continued to support all employees by inviting a guest speaker from the Resilience Project to inspire staff to emerge stronger. HTG is also proud to have run the successful “Phoenix Project “ which involved bringing back staff who were temporarily stood down due to Covid-19. In August, Techwell was celebrated after being awarded Telstra Enterprise Queensland Partner of the Year. Another milestone which was an immensely proud moment for our Directors was the celebration of 15 years since they opened the doors to their first business – a Telstra Store in Helensvale. 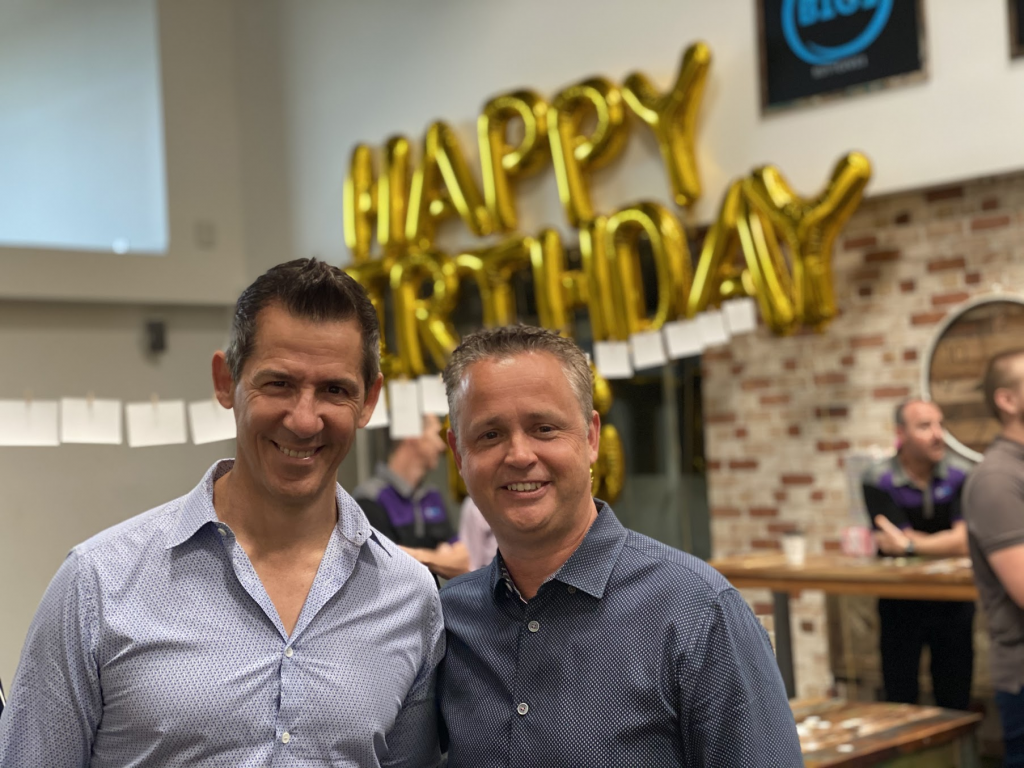 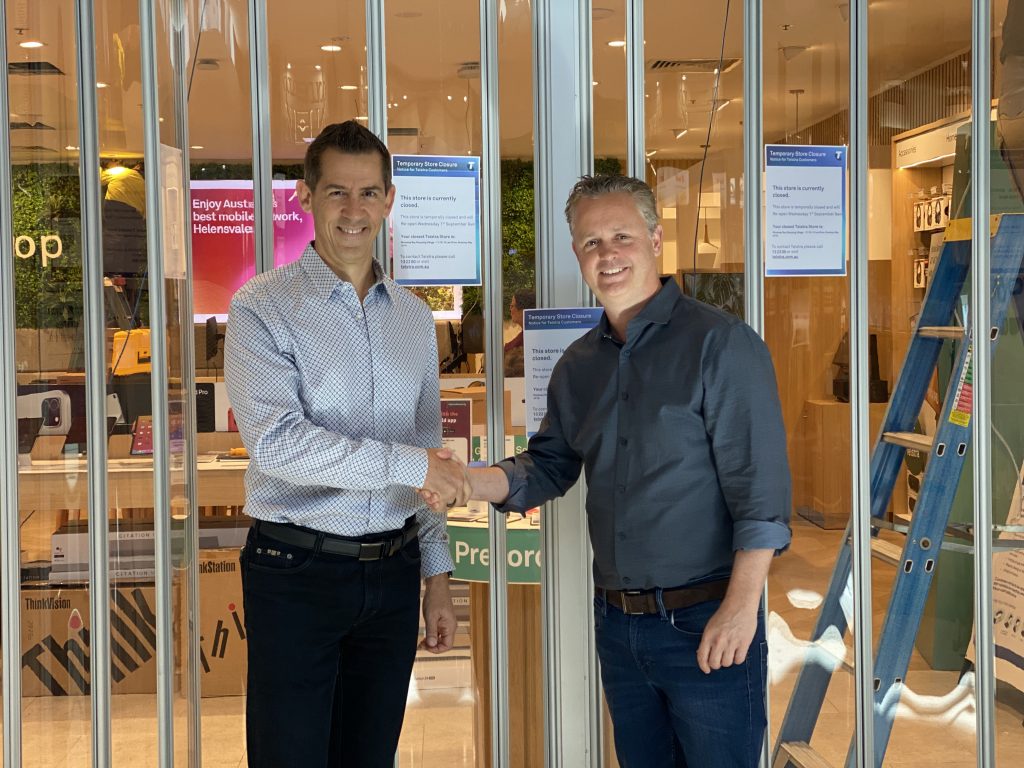 In early 2021, Telstra made an announcement that they would be transitioning the Telstra Retail Licensed Channel back under the Telstra company portfolio. In September, all three of HTG’s Telstra Retail Stores including Helensvale, Burleigh Heads and Harbour Town were handed back to Telstra. This made way for a new and exciting opportunity to build and create a new business at our HQ premises called Habitat HQ, a co-working office spaced that launched in late 2021.